With an ever expanding list of football pies being reviewed in our PIEremiership, there was one noticeable football pie manufacturer missing. Having won multiple awards at the British Pie Awards over the past few years, both in the football pie category and beyond, we still hadn’t yet been to a ground selling Piglets Pantry pies. That all changed with an invite by MK Dons to rate their pies before their Championship tie with Blackburn recently. 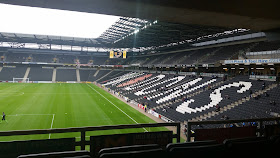 We were delighted to be offered the chance by Stephen Miller (Food and Beverage Operations Manager) to head to Stadium mk to sample some of their pies, which included the Steak and Concrete Cow Ale pie which has been exclusively produced for MK Dons. This – as I found out talking to Jo Hunter from Piglets Pantry, who kindly came up from the south coast to meet us and talk us through the pies – was one of many things that help Piglets Pantry stand out from the crowd. They regularly talk to the clubs/businesses they supply and the supporters who are buying the pies to get their feedback and aid them in developing new products.

For me, this is one of the distinct advantages of having a small, personable pie business supplying the pies in a football ground, as opposed to the more homogenised mass producers sold within many UK stadiums. You get pies that the local fan base can connect with, support and recommend. Indeed, the Steak and Concrete Cow Ale Pie had been developed with a group of MK Dons supporters and using a local ale, a personal touch that seemed to be going down well with the fans there!

Sales of Piglets Pantry pies at their local football club, Brighton and Hove Albion, seem to back this up. Since taking over the pie supplying their ground sales have rocketed from 1,500 to 10,000 pies a match, which is quite phenomenal! It certainly shows that if the quality pies are there, people will pay a bit more for a premium product. It’s therefore no surprise to see the pies being sold in more grounds, including hospitality at Chelsea and West Brom, plus recently in Twickenham and the Millennium Stadium for their Rugby World Cup fixtures. 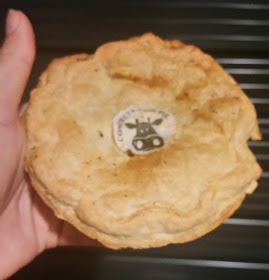 Back to MK Dons and the pies to rate were the Steak and Concrete Cow Ale Pie, the Chicken, Gammon and Leek Pie and the Spinach, Mushroom and Ricotta Pie. They also had a special on that game – the Chicken Balti Pie – which Pierateer Sam has his eye on when he visits, as our resident Chicken Balti football pie expert! I was impressed with this range of pies available to home and away fans, with MK Dons putting on a special pie for away fans dependant on where they were from. It’s one of the few clubs I’ve found where they are actively looking out for the needs of their fans, rather than just giving a very generic catering experience to all.

Onto the pies and my overall thoughts are that these are premium pies being sold at a very reasonable price, especially for a football ground, at just £3.50. The pastry is shortcrust around the sides and base, with a puff pastry lid. It is noted that these pies do not contain lard or suet, giving them a paler colour but also a lighter, crisper pastry. This means the pastry is less moist and can hold the filling in thinner, crisper pastry. While this different pastry did take a little getting used to, having primarily eaten and enjoyed butter-rich pastry which is more golden and softer, I enjoyed the firmer crunch this pastry had and it did feel a lot lighter and less stodgy as a result. The main downside was the outer rim of overhang pastry which was a bit too dry, but the rest of the pastry when eaten with the filling was well balanced.

All the pies held together brilliantly when eaten by hand, with generally a great consistency to the fillings, which is ideal for a football pie. The capacity was very strong in all of them, with the meat pies particularly standing out against most other football pies in terms of the strong meaty content and packed filling.

Chicken, Gammon and Leak
First up to rate was the Chicken, Gammon and Leak which is a regular on the menu at MK Dons. The pie was packed with a nice blend of chicken and gammon in a light béchamel sauce, spread well throughout the pie filling. The chicken was lovely and tender, the gammon not too chewy and the leak complemented the flavour well with the white sauce. The consistency of the filling was good for a hand held pie and balanced the crisp pastry well. Overall a top quality filling and while the rim, side and base pastry was a little too dry and crisp for my liking, I’m sure many would love this pastry and it well deserving of Pierate Highly Recommended status. 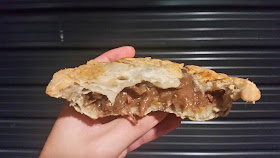 Steak and Concrete Cow Ale
There’s no denying we love a good steak pie on the Pierate Ship, so it has to be a top, top flavour to challenge for the top spots in our pie rankings. We very much appreciated the lengths Piglets Pantry had gone to in order to create this pie with a local ale to the MK Dons, creating this pie exclusively for the team after meeting with local fans on a taster day. The meat was good quality and the gravy had a good viscosity to it for a football pie. Another good pie but we felt it didn’t quite match the Chicken pie in terms of the mix of flavours. No doubt it would however still be very popular amongst the steak pie fans at the game! 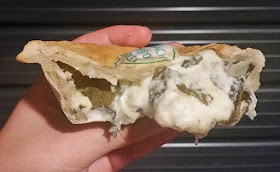 Spinach, Mushroom and Ricotta Pie
It’s worth saying from the start that this was one of the best vegetarian pies I’ve had! I’m never normally one to go for the vegetarian option if there is a meat alternative (especially if they are sold at the same price), but this Spinach, Mushroom and Ricotta pie had such a rich flavour, with a delicious light runny cheese sauce and complementary spinach and mushroom content that I didn’t really miss the meat! In fact my friend Martyn was tempted to convert to veggie pies after eating this one! The filling was nicely balanced and while the consistency of the sauce was a little too runny to easily eat with your hands, it complemented the pastry well. This pie was second in the Vegetarian pie category of the British Pie Awards 2015 and you could easily see why!


Overall then a great selection of football pies at MK Dons, with one of the best vegetarian pies we’ve rated to boot! It means Piglets Pantry have achieved what only two other clubs have – a Pierate Highly Recommended football pie – and puts them comfortably into third place in the PIEremiership. My thanks once again to Stephen and Jo for their hos-pie-tality at the game and, of course, the very good pies. We look forward to trying some more of the Piglets Pantry range soon!

Thanks for getting in touch with the Pierateers!